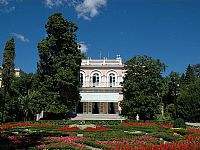 In historic documents we find data about the development of the park from 1845 to 1860, in the surroundings of Villa "Angiolina", once the property of Iginio Scarpa, a great lover of nature. Here many plants brought from the Far East, South America, Australia and other parts of the world may be found. The central Opatija park is a horticultural monument covering an area of 3.64 hectares. It is divided into 60 fields and about 159 plant species grow here. A great number of them originates from distant parts of the world and is not typical of this region. Among the numerous interesting plants growing in the park is the Japanese camelia (Camellia japonica) which in time has become the distinctive symbol of Opatija. In the park stands the oldest building in Opatija, the Church of St. Jakov, mentioned for the first time in historic documents in 1449. Today the park is divided into two separate units, one near the church - the Park of St.Jakov and the other near Villa "Angiolina" - Park "Angiolina". Villa "Angiolina" is the building that certainly marked the beginning of the tourist epoch in the history of Opatija. Saint Jacob’s Church Pending its building in 1844. (actually a reconstruction of an older building owned by baron Haller von Hallerstein), Opatija was a relatively large settlement with about 120 houses, clustered mainly around plots further away from the sea coast and chiefly oriented towards fishing and seafaring. With the arrival of Iginia Scarpa, a patrician from Rijeka, and building of his summer house Angiolina (named after Scarpa’s then already deceased wife, originating from the Sartori family), Opatija opened her doors to a whole line of guests and passengers, among whom it is noteworthy to mention the Austrian empress Mary Ann, the botanist Heinrich Noë, the Croatian ban Josip Jelačić and others who in their enthusiasm for the local vegetation and climate spread the fame about Opatija and thus prepared the ground for the future health resort. After Scarpa and his son Paolo, who as early as 1869 entertained the idea of establishing a sanatorium, the villa was owned by the Moravian nobleman Chorinsky, the Southern Railways Company (during their proprietorship the villa accommodated the heirs-to-the-throne couple Rudolph and Stephanie and their guest, the Styrian satirist Rosegger), the International Wagon-lit Society, the Health Resort Commission, and others. As the price of the villa rose and taking into account the fact that Iginio Scarpa purchased the entire grounds at the price of 700 florins, in 1910 the villa with the surrounding park full of exotic plants was sold for 2.5 million crowns. In Scarpa’s time the meeting-place of the upper crust of Rijeka, thereafter the site of summertime entertainment on its terraces, during the end of the Austrian period the seat of the Health Resort Commission with an orchestral pavilion and lively promenade in front of its southern façade, today in the villa is situated Croatian museum of tourism.