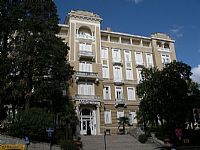 This was the second hotel to be built in Opatija. As soon as it became evident that the Kvarner would not be able to accommodate the steadily increasing number of guests, the Southern Railways began building a new hotel, which was already opened in 1885 and named after the heiress to the throne Kronprinzessin Stephanie who, with her husband, attended its opening. Wilhelm, the architect, on this occasion also offered his guests all the luxuries of that period, from central heating to a swimming pool and a cinematography which were later connected by corridors to the principal part of the hotel. Thanks to its representational form and location, it was no wonder that this was the choice of guests such as James Joyce, Franz Josef I, or Josip Broz Tito. The hotel is also interesting for the fact that through the changes of its names one can recapitulate the entire political history of this region. The Italians changed the name to Regina Elena, who was the wife of Victor Emmanuel III; from 1945 to 1948, hence during the era of the Yugoslav-Soviet love affair the hotel was called Moscow, and after the break with the Cominform it changed its name to Central. With the fall of Ranković and centralism in 1966, the hotel was named Imperial, and is known as such to this day.