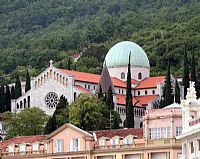 Church of the Annunciation

As early as 1906 the bishop of Trieste, Franjo Nagl, laid the foundation stone for the neo-Romanesque edifice with its pronounced green cupola that can be seen from afar, but once again the departure of Austria postponed the completion of the building that was designed by architect Karl Seidl. During the war itself, the barely covered construction served as a shelter for mules, and on one occasion the entire roof caved in. The Italians continued building it with stone supplied from Kastav by means of the New Road (the “Upper Road” or “High Road” that was penetrated in 1908, but was not asphalted until 1930), whereas for the interior decoration donated stained glass were used and pictures by Kralj, a Slovenian artist.