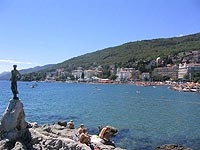 Cruising with vintage sailing ships along the magnificent Kvarner coastline & islands.
For this trip all you will need is a few T-shirts and a swimming costume to spend seven unforgettable days sailing on the northern Adriatic Sea from one island to another. Relax and let the captain and his crew (especially the cook) take care of you. During the day you can swim, snorkel, sunbathe, and explore the underworld of the Adriatic Sea. The evenings you have free to find a good restaurant or discover old churches or other historical monuments…

Departure is from Opatija harbor at 13:00. After lunch we stop to swim in the crystal clear sea then continue to the island of Krk - the biggest of the islands. This Island has immense variety in its villages large and small, gentle green promenades bare rocky wilderness, tiny islands and hundreds of hidden bays and beaches. Overnight in town of Krk and there you are able to explore the old town on your own.

Breakfast is served on the ship after which we sail to the Island of Rab, which is known as the “island of love”. The small town of Rab, where you will spend the night in the harbour, is encircled in medieval walls, Romanesque church towers, churches and palaces, stone streets and ancient facades. Enjoy the “gallery” on the streets and squares where many painters and artists exhibit their works.

After breakfast we cruise from Rab along the island of Pag with a swim stop on tiny island MAUN, and continue to towards Zadar in the afternoon where we spend the night in the port. Possibility to join our guided tour of the city in English. For centuries the metropolis of Dalmatia, and today the centre of the region, Zadar has been a city of rich monumental heritage of world importance visible at every step even today: the Roman forum dated to the 1st century AD, the church of St. Donatus dated to the 9th century AD – the most famous Medieval basilica and the symbol of the city, the mighty city walls with representative Port and Land gates from the 16th century AD, and numerous palaces, villas and other monumental heritage. The town is full of great restaurants packed in the center and already mentioned historical monuments that can be found in and around the city – of special interest is the famous Zadar Sea Organ.

Early departure for Island Molat or island Olib (depending on available space in the small harbours of these two islands). The Molat island is situated in the northern part of Zadar's archipelago. The peace, silence and necessary minimum of infrastructures (4 restaurants, 3 shops) guarantees an holiday far away from usual tourism. Olib is a place where you can rest your body and soul. There are no cars or trucks, just a tractor or two, which are necessary for the habitants of Olib. The island has numerous beautiful beaches. When you come ashore you cannot but notice a beautiful sandy beach near the port. The village is small but wide. The island was inhabited already in the antiquity. The parish church is from 1632, and about twenty Glagolitic codices from the 16th - 19th century are kept in the parsonage.

Wednesday: ISLAND OF MOLAT or OLIB - ILOVIK - ISLAND OF LOŠINJ

After breakfast and morning swim, we sail to the peaceful island of flowers called Ilovik where we have a stop for swimming. Departure for the island of Mali Lošinj (lunch on route), which is one of the most popular islands on the northern Adriatic due to the abundance of pine trees and clear waters. Mali Lošinj is among those places with the sunniest days per year in Europe. Take a walk along the harbor and dare to take a night swim on the sandy Cikat beach or visit nearby, picturesque, town of Veli Lošinj (only 5 km away). Overnight in Mali Losinj.

After a morning swim we leave for the island of Cres. This long and narrow island is covered with oak, beach and pine forests as well as vineyards and olive tree plantations. Cres and Mali Losinj used to be one island but a channel dug by the Romans separates them. We spend the night in the harbor of the typical medieval city of Cres.

After breakfast we leave to Opatija. On route you will have the opportunity to enjoy the beautiful view of famous Opatija Riviera. Arrival in the late afternoon. Possibility to join our English guided tour of Opatija immediately upon arrival to the port. For your last night on the ship we recommend you have a farewell party on the ship while exchanging addresses with other passengers who have by now become your new friends. You can also take a stroll along famous LUNGO MARE pathway to the fisherman village VOLOSKO – well known for good seafood restaurants.

After breakfast you will say goodbye to the crew and we hope to see you again aboard our cruises.